There Is Something Better Than Water

When it comes to quenching your thirst and cooling you down, nothing beats good old-fashioned water. The same can’t be said for the cooling systems of your engine though. Naturally plain water is the preferred choice when filling the cooling system of your engine, but it has its drawbacks.  One of those is corrosion. First of all, plain water is not al-ways "plain." Depending on where it comes from, "plain," or pure water can have certain chemicals within its makeup that can cause corrosion to certain metals, the most common in a race engine being aluminum. Corrosion is an electrochemical reaction that occurs in time when the metal is exposed to water, which is exactly what happens inside your engine. The heating and cooling of the water doesn't help matters any as it speeds up corrosion. It's the reason there is an anode rod in most water heaters in your home.  A typical water heater in your home is made up of steel or cast iron which has a tendency to corrode over time. Usually made from magnesium, an anode rod is often referred to as the "sacrificial lamb," as it sacrifices itself in order to protect the water heater, and the exact reason why it requires changing from time to time. One of the other problems associated with water in a race engine is its high amount of surface tension. Pour plain water on a level table surface and you can see that it doesn't flow or roll off too easily. In a race engine, that same thing occurs in different areas and hence the reasoning behind the use of a "water wetter-type" additives, which may also contain some form of anti-corrosion protection. However, probably the biggest problem with plain water comes with something known as water vapor. When water boils, the vapor generated is water vapor which does not con-dense back into the liquid. It's often pushed out of the cooling system into either the atmosphere or; as mandated by sanctioning bodies; an overflow, or catch can. Once the engine does cool, the actual level of the water in your engine will be lower because of that. When numerous heating and cooling cycles occur, the level can drop quite low, and the reason for a sealed catch can type system. Additionally, as the water heats up and expands it tends to not only create pressure in the system but also create pockets of air. When that happens, there is no liquid in some spots to carry off the heat. That in turn creates its own problems, problems which are related to any kind of water-based liquid. The backside of the combustion chamber is the most crucial spot to remove heat. If the water boils there you immediately lose any cooling and the problem escalates very rapidly. Enter Evans Waterless Coolant. A glycol-based liquid, Evans coolant boils at a very high temperature, 375-degrees. Partially because of its high boiling point, vapor expansion doesn't occur like water. While most drag racers would flip if they saw a coolant temperature of 200, the ability of the Evans product to avoid vapor expansion means little or no pressure within the system. "Just to clarify," says Mike Tourville of Evans, "the Evans liquid will expand at the same rate as a water-based liquid, but it's the lack of vapor expansion that is the differentiating factor." 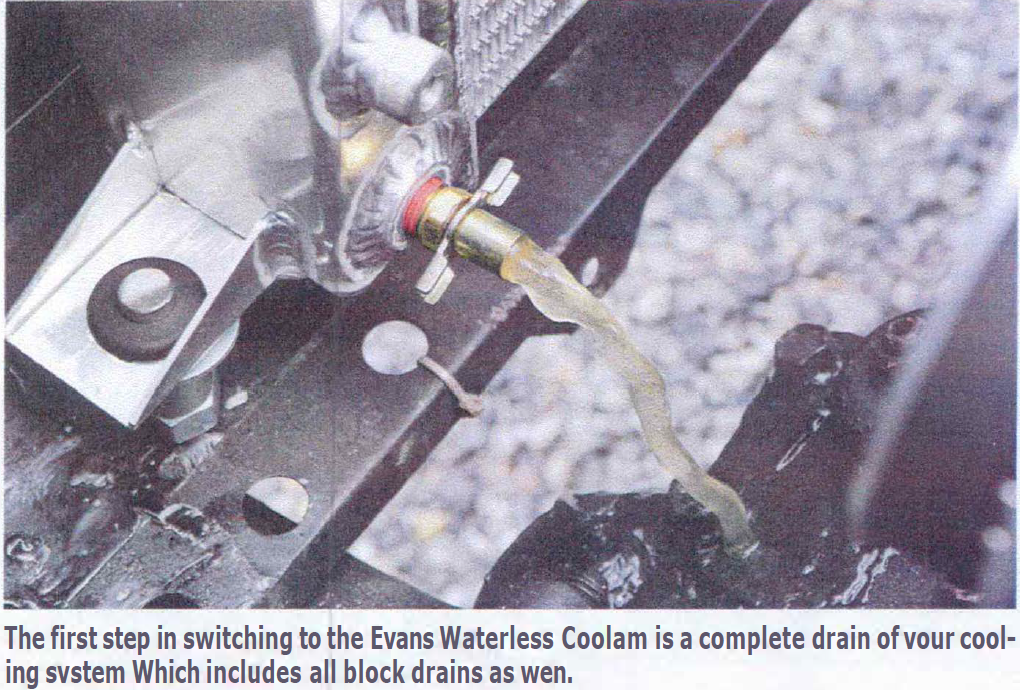 Jim Marino is a racer who has used the Evans Waterless Coolant in his eight-second bracket car for around eight years. "There are a couple of benefits to the product," Marino says. "Obviously I like the fact that it doesn't expand and create pressure. Let's face it, we all get those tiny drips of water seepage from time to time, which only gets worse when the pressure in the cooling system increases. Because the Evans builds little pressure, you never get those tiny drips due to pressure. Everyone is aware not to remove the radiator cap of a hot engine. I can make a run with my car, come back to the pits with the coolant temperature at 180-degrees and easily remove the radiator cap with very little pressure whatsoever." 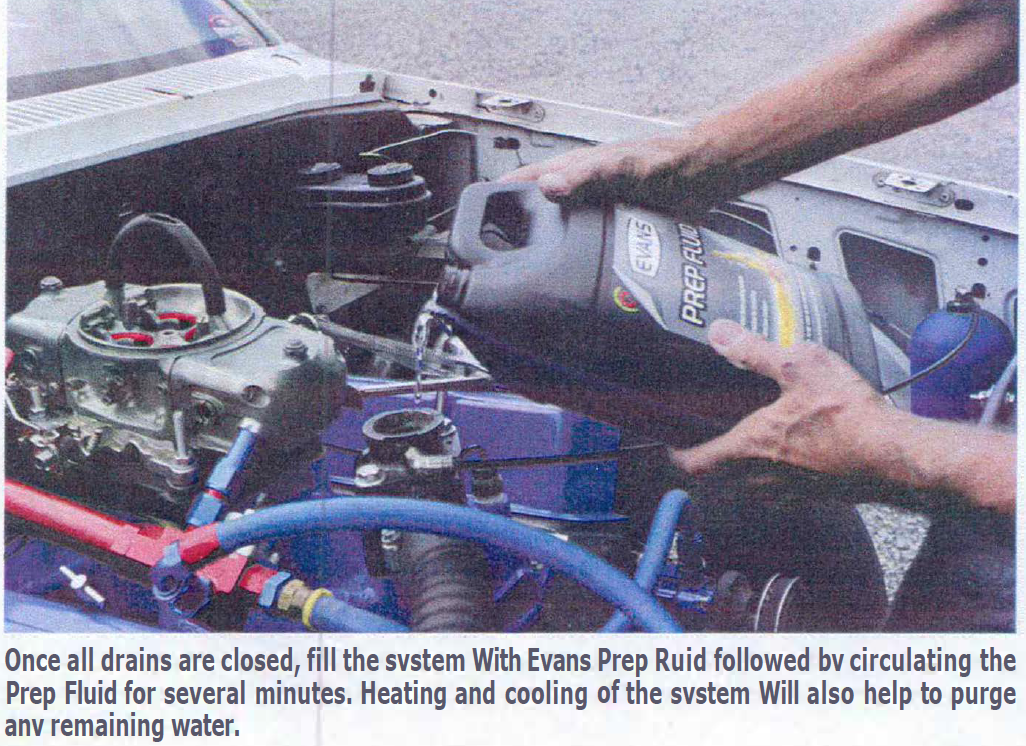 There are two reasons for pressure in a cooling system with the first being to raise the boiling point of the coolant. While drag racers are not concerned with raising the boiling point, the second reason for pressure would be to assist is assuring that hopefully water finds every nook and cranny of the sys-tem to be sure to pull heat from every area of the engine. ''The Evans product remains a liquid well past the point where a water-based coolant boils," adds Tourville. "That means we have constant liquid-to-metal contact ensuring consistent, efficient heat transfer avoiding hot spots." "Additionally, there is absolutely no corrosion whatsoever with the product," Marino adds, "which can only extend the life of your engine's components and radiator."

While not a hard and fast rule, the use of antifreeze; also a glycol-based fluid; in the cooling system of your race engine is a no-no. The only reasoning for this comes when it exits your sys-tem onto the race surface. Antifreeze is a very hard fluid to clean up when it finds its way on the track. As we mentioned earlier, the Evans Cooling product is also glycol-based, but no harder to clean off a race surface than simple water. In that regard, the NHRA has had no problem in its use. The primary objective when switching to the Evans Waterless Coolant is to eliminate any water from your cooling system. This is done easily with Evans' Prep Fluid. Since certain parts of the cooling system might not drain completely by gravity, installing a scavenging fluid is the most practical method of removing all of the water in your sys-tem. Although the Prep Fluid is not formulated to chemically clean the engine of rust and scale, the process of circulation and draining will help remove any loose sediment. After draining your system of water, its best to leave any hoses, petcocks or drains open for a day or so to completely as possible help to "dry" your system. High volume air can also be used to accelerate the evacuation of coolant if you don't have the luxury of time. In addition, be sure to drain any overflow tanks as well. Fill the system back up with the Prep Fluid and allow it to circulate for several minutes which totally eliminates and cleans the system of any remaining water. Once again, drain the Prep Flu-id and finally install the Evans Water-le s Coolant, making sure to properly dispose of any fluid drained from your system. It's a simple process but one which can extend the life of your engine components, and who wouldn't like that. 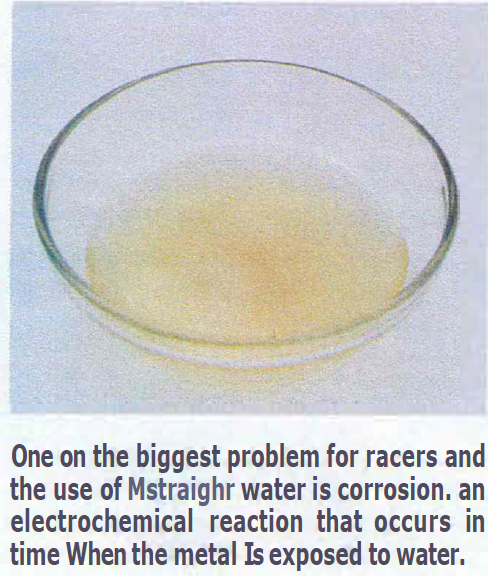